Return to Our School

The school was first opened in 1842 when, on 23rd March, the site, valued at £50, was granted by the Dean and Chapter of Christchurch College, Oxford “for the purpose of erection of 3 rooms to accommodate 103 boys, 103 infants and 112 girls – allowing a minimum area of 6 square feet per child.”

The ground given was the plot of land known as The Old Rectory Garden, situated in Aylesbury Road. The school was for the poor in Tring and for no other purpose than promoting the education of the poor in the principles of the Established Church of England.

School logbooks have been in existence since 1863. This was the time of school monitors and pupil-teachers. There are references to various kinds of sickness for which the school had to be closed. Scarlet Fever could be a killer, as could Diphtheria of which at least three children died in 1891.

Attendance could be very variable because of bad weather as children had to walk across fields for miles to get to school. Sometimes children came to school at the age of three if the mother went out to work and there was no one to look after them. Many children were late on the afternoon of 12th July 1889 because the Shah of Persia passed through the town.

Classes were often nearly 60 children, but must have been manageable because of poor attendance. Children often had to carry meals to their parents in the fields and had to go out gleaning. Attendance was not too good on the day The Wild Beast Show was in town!

In those days, the cane was used in this school, though not many cases are recorded. One is perhaps interesting enough to be mentioned – in 1891 a boy was caned for taking the elastic out of several girls’ hats!

Perhaps our school can claim to be one of the first with a school bus, as Lady Rothschild provided a covered van to convey children from Hastoe to and from school in the winter of 1903/4.

During the First World War, the building was taken over by the Army Authority and maintained as a hospital for the British sick and wounded. The boys’ department was accommodated during these years in the Market House and Church House, now the Youth Club.

From 1931, after a re-organisation, there were two separate schools in the building – the junior school with Miss W Baker as its Headmistress and the senior school. The latter moved to its own site and buildings in 1957 and is now known as Tring School.

In 1939, after the outbreak of the Second World War, the school was closed for a few weeks and later, in 1940, the building was used as a reception centre for some 300 children from the bombed areas of London.

In November 1961, approval was given for phase 1 of a new Junior School building to be built in three quick stages, but a beginning was not made until December 1962. Meanwhile, the school roll had grown to such an extent that the Temperance Hall had to be taken into use as a classroom.

The school experienced difficult times with large classes and shortages of staff.  Annual Sports Day was a great event for the children, though hard work for the staff involved as the event was held on the Cricket Field, there being no school field in existence yet. 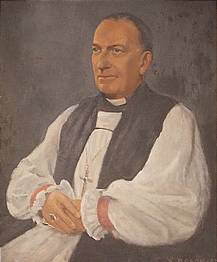 The first stage of the new building programme consisting of the Assembly Hall and the two first year classrooms was completed in September 1963 although the building programme continued until 1972. The Rev’d Claud Thomas Wood, the Parish Priest of St Peter and St Paul Church, Tring from 1930-1942 gave his name to the school when he became Bishop of Bedford and this was marked with a special thanksgiving assembly on 24th November 1964, when the Bishop of St. Albans blessed the new buildings in the presence of many guests, parents, children and friends of the school.

The school’s learner swimming pool was opened in 1970 as a direct result of the tremendous effort of a committee of parents. From this committee, grew a Parent Teacher Association, which took on the task of providing changing rooms for the pool. This was their first of many gifts to the school. The pool was removed to make way for a new play area in 1996 as it proved uneconomic and failed to satisfy the demands of the National Curriculum.

The school building was completed in 1972. There were four pairs of classrooms – one pair for each year group, a fine hall, separate dining hall, resource area, a kiln room and additional offices and store rooms. Outside there were two play areas, a field for games and a greenhouse. The school was officially opened in summer 1973 by Bishop Robert of St. Albans, who later became Archbishop Runcie of Canterbury.

In September 1993 the old oil tank for the boiler was removed, the boiler having been converted to gas some years before and the space converted into a room to teach a small group of children. In addition, the School Association paid for two activity trails, one along the side of the top playground and the other adjacent to the lower playground, thus increasing the play area for the children.

In 1995 a new entrance and library was built, and a new office and reception area created within the extension in autumn 1996.

In the summer of 1998 the school celebrated the 25th anniversary of the opening with a church service, a performance about the school’s history and an afternoon of activities for the children. The church presented a bench seat. A pond for environmental study was created in 1999 in memory of Helen Simpson, deputy head teacher. The Millennium was marked by visited to the Dome and a school photograph taken from a helicopter which then landed on the field.

The Queen’s Golden Jubilee was marked by planting a tree in front of the school.